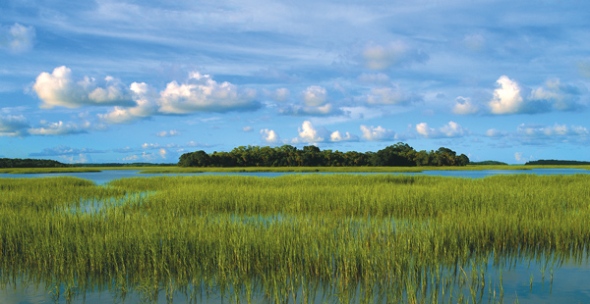 Many of my fondest food memories come from our family vacations.

My parents did not have a lot of extra money; budgets were followed and the Depression-era knowledge that each of my parents inherited from their parents’ scrimping and saving  figured large in my life.   Dad  fixed the cars, built the bookcases, landscaped the yard.  Mom balanced the checkbook, shopped the sales, put up the garden’s bounty.   But, despite whatever was going on financially, my parents always found a way for the four of us to take a week’s vacation.   And mostly, we went to the beach.

When we lived in DC, we went to  Scientists’ Cliffs on the Chesapeake Bay or to Virginia Beach at mouth of the Atlantic.  How, I don’t know…Dad was on a post-grad grant and Mother was a teacher’s aide.   When we moved to Tennessee, in the early Knoxville years when there was a bit more money, we went to Pawley’s Island, SC, paying a whopping $500 for a week’s stay at an early 1900’s beach-front rambler without air-conditioning.   Later, when they sought out something “less commercial” than Pawley’s (….as if ), we rented a privately owned, 2-room beach shack on a barrier island state park south of Charleston.

The common thread between all these places is that we ate well.   In hindsight, we ate very well.

There was a ritual to these oceanside vacations.  We’d depart as early as possible on a Saturday morning in July or August, drive the 4 to 6 hours in one of my Dad’s  Saab’s, stop at the local grocery store for the entire week’s worth of groceries, pick up the keys to wherever we were staying from whomever held them (real estate agent, neighbor, park ranger…), then descend upon our house, unload the car, claim our beds, set up house and get to preparing the first evening’s meal.

While Mom and Dad cooked and stowed, my sister and I would invariably explore the neighborhood, the woods, the beach, the marsh….whatever the immediate premises promised, we’d make quick survey of it.

Usually, that first meal was steak, baked potatoes and salad.   In our family, this meal is a “grounding” meal, one served on Sundays, at graduations and confirmations, on  arrival at some new vacation spot, at the arrival of a long-departed, much-loved relative and, mostly, just when all was right with the world.

The first “official” morning on the beach, the “rules” were  laid out:   We’d get up when we wanted to.   Breakfast was up to each of us.  Dad might surprise us at some point during the week with eggs and bacon and english muffins and fresh fruit.  Lunch was to be had after a nice morning on the beach. Liz had clean-up duties these nights:  I those.  And, with great importance, my parents would post the tidal schedule for the week, pointing out the optimum times to pursue dinner.

In the Brown family, lunch is a always smorgasbord:  cold cuts, american cheese in plastic sleeves, iceberg lettuce, cottage cheese, sliced tomatoes, leftover roasted chicken, green bean salad with onions, potato chips, dill pickles, beer with an ice cube….whatever.  After lunch, Mom and Dad  “napped” for an hour or so and we, as children, were encouraged and expected to go as far and as wide from the cabin as possible.    Ahem….

Crabbing was a sport in which none of us, meaning my Mother, Sister and I, had any interest.  But at Dad’s insistance and, through our reluctant experiential learning year-after-year, we all came to embrace it as an elemental event in the Brown Family Vacation.

The key, Dad explained each year, was to position ourselves at the outflow of a marsh exactly an hour before low tide.  This way, the brackish water would be draining from behind the barrier island into the ocean, and, with it, would come the hapless blue crabs, stupidly chasing their next scrap of food from the tidal creek floor.

So, armed with our chicken necks from the Red and White, the leaded hooks to which they were affixed and the 6 to 12-foot long runs of kite string tied to each, we’d cast our meaty lines into the quickly moving marsh water, waiting for dinner.   And we’d stand there.  In the blistering South Carolina Low Country sun.   The tiny mud crabs would emerge from their holes and  wave their single claws at us.  We’d wait.   And wait.   And talk.  And joke.  And explore.  And unwind, children and adults, unknowingly watching one of the primal forces of nature bring to us our next, glorious meal.

And then, invariably, one would amble along:  the embarassed blue crab, alternately eyeing the raw chicken neck, then us up through the water, then whatever flotsam was floating by.   But always, always, watching that chicken neck.    And, always, it went for the bird.  And with that, even an 8-year old can scoop his crab net into the water and grab the doomed bottom feeder.

Tom Brown was never more proud than when we’d load the car up with a styrofoam cooler full of live, constantly clicking, almost-hissing, crabs.  We’d drive a couple of miles past our beach cabin, off our tiny island, all of us happy, listening to Simon and Garfunkel.   On the next island, the “Gay Fish Company” sign was Dad’s signal to wheel the Saab down the sand path to a dock on a back stretch of the  marsh.  Liz and I would stay in the car while Mom and Dad picked up a couple of pounds of shrimp, right off the boat.

Once home, Dad quickly set to cooking the couple or  three-dozen crabs we’d caught.  A huge soup pot was put into action, two or three beers poured into its depths.   Once roiling, the sticky, sweet smell of boiling hops signalled it was time to send the crabs to their death.   One-by-by one, Dad placed them into the steamy barley with pathetic tongs, long past their prime.   The crabs would claw at the pot with a terrible, violent, horrible clamor in which I secretly took pleasure.

A few minutes later, the bright red crabs were pulled out of the steaming beer, placed back in the cooler, topped with ice from the Gay Fish Co. and set aside on the porch.   Mom then got to work on salad and set another pot to boil for the shrimp.   Outdoor showers were taken after last minute dips in the ocean.   When the shrimp was done and chilled on top of the crabs, freshly shucked corn was dropped into the hot water.   Gin and tonics were poured.   Music played.  Liz emerged from the shower, blond hair glistening gloriously as only an un-appreciative 15-year old’s can.  The evening breeze shifted and cooled the shack.

At the tiny porch table covered in newsprint, the bounty of our day was laid before us:   Dozens of beer-steamed blue crabs, a huge bowl of boiled, iced, South Carolina white shrimp,  drawn butter, homemade cocktail sauce, corn on the cob from a farmer’s garden a couple of islands over, a simple green salad with cucumbers and radishes and house dressing from Knoxville’s L’Orangery Restaurant.  Gin.  White wine.   Orange Juice Cocktails with marischino cherries.  Dinner rolls and soft butter.

From the beach came the constant crash of the Atlantic’s surf and the ever-increasing sound of  cicadas.  If we were lucky, the deer would quietly populate the two or three dune lines between us and the surf.

And if the universe was approving, which it invariably was, our evening walk on the beach would reveal a female sea turtle, or two, desperately laying her eggs, carrying on the traditions of eons.