← For the Bible Tells Me So
Thank You Every Day → 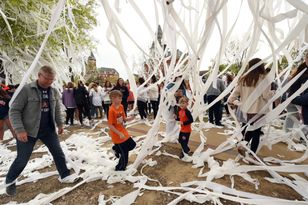 My Alma Mater, Auburn, never gets the credit it’s due.   It’s been the stepchild of Alabama higher education since before its inception.  It’s been the scrappy street fighter to Tuscaloosa’s sophisticated ring boxer.   Its National Championships have been repeatedly denied and disputed.  Auburn’s academic credentials have never been brought to the forefront.  The University’s impact on the State:  underestimated and overlooked.  Professors taught there because they were compassionate, had hidden talent and thought they could do some good there on the Plains.  And perhaps, because they might not make tenure elsewhere.

They tell us we’ve never amounted to much.   And if we did, it was a fluke, an anomaly.  They tell us we cheat, that we’re less than.  They question our every move, shine the brightest of lights on us.   They call us a cow college — as if cows are inferior.  As part of the Auburn family, you are certainly more well aware of your faults than any outside critic will ever be.  You can’t help but be; you’re told of your inferiority at every turn.

The Auburn Creed teaches us to be humble, above all else.  To value what matters in life.  To work hard.   To elevate honesty and the human touch.   To appreciate clean sports.   To count on what we alone can earn.  And we do.  And we go on, ALL IN, as family, rebounding after every loss with optimism for the next contest.  For we know what matters.

Being the eternal underdog teaches you that it’s OK to lose.  It’s OK to make mistakes.  And it’s OK if your team doesn’t always grab the brass ring.   Sometimes second place is better.  Sometimes giving it your all teaches you more than winning it all.  Showing up and giving it 100% always wins.   That’s the Auburn way.

And tonight, after I watched Bruce Pearl (a cheater, a liar and a damn fine basketball coach), and his team of equals fight back to come *this close* to a shot at the National Championship, I realized once again that there is great value in not winning.  There are infinite lessons in losing – more so than winning.  The pain of defeat.  The inherent improvement that results from licking one’s wounds.  The joy and utter exhaustion of giving it all.   That fleeting glimpse of what’s possible.

The lessons learned through picking up the pieces, I think, serve one better than sustained victories and constant success ever can.

So, with that, I say:  “War Eagle, Y’all!!  It’s great to be an Auburn Tiger.”   I love this University that continues to teach.